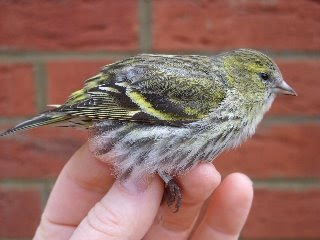 On 30th March local ringer Gerry Rawcliffe put up a net in his garden (just outside the park recording area) in the hope of catching a Siskin - small numbers have been visiting local feeders as well as wintering in the park.
"After some initial frustration with birds wriggling out of the net," Gerry reports, "I got lucky on ... with a female Siskin [left], and then I was just about to take down the net to go out when I noticed a Mealy Redpoll [below] come to the feeder, and after a few nerve-wracking moments it popped into the net."
This Mealy is clearly a male, and appears to be one of the two well-watched males which have commuted between the park and Dukes Avenue this winter. The species is a scarce visitor to the London Area, and must be a real rarity for ringers in southern England. 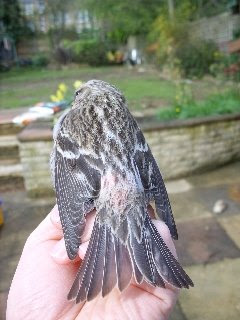 Woodcock seen flying high towards Hornsey, observed from Pitch & Putt at 17:05 by John Murray. A good sight tick, with usually only one every year or two recorded.
Posted by APOG at 00:03

Despite the cool weather and often northerly winds, spring migration has got under way relatively early this year. Sightings of Northern Wheatear and Sand Martin in the first half of March were noteworthy, but there has been plenty more of local interest. Here is a brief summary of recent reports in the park:
March 24: at least one Jackdaw flew over (three sightings of a single bird), plus two Siskins, two fly-over redpolls, singing male Blackcap in the Grove and Water Rail at the conservation pond
March 23: Rook flew north, and one Brambling still by the deer enclosures
March 22: Chiffchaff near the conservation pond
March 21: 3 Meadow Pipits and 30 Redwing
March 19: Siskin over and Jackdaw perched and calling in the conservation area
March 17: male Northern Wheatear around the sports pavilion, male Common Stonechat still near sports pitches, 1 Sand Martin high over the reservoir, singing male Blackcap at Blandford Hall birches, 2 Greylag Geese flew south
March 16: male Common Stonechat in brambles along the ditch around the sports fields
March 15: single Mealy and Lesser Redpolls, and another briefly seen redpoll, together in plane trees near the deer enclosures, and two Bramblings there later the same day, male Bullfinch briefly by conservation pond
Posted by APOG at 14:11