Mealy Redpoll: one of the two local males (Dominic Mitchell).

Six days ago Gareth Richards did well to locate a small party of redpolls in a birch tree opposite the Dukes Avenue entrance to the Grove. Lesser Redpoll is a scarce enough bird to find in the park these days, but to have one consorting with three even scarcer Mealy Redpolls - the larger Scandinavian species - was a real coup.

The birds had been looked for since, but with no success. However, at about 12.30 today Dominic Mitchell was walking along Dukes Avenue with his family and some friends when he spotted two Mealies, including a fine pink male, feeding in a birch on the pavement outside number 128. He texted the news out, after which the redpolls were seen intermittently by others during the afternoon. Not long before the birds went to roost, Gareth and Dominic ascertained that at least six individuals were involved - three smaller, darker and more buffy-brown Lessers, and three larger, essentially paler Mealies (two males with obvious pinkish breasts, and a female).

The fact that all six have not (yet) been seen together on Dukes Avenue suggests that there is another as yet undiscovered feeding site, probably somewhere in the north-west section of the park, in the direction of which the birds have been seen to commute. The light was fading as the birds came within photographic range, but a record shot of a male Mealy appears above.

It capped a good day locally for Dominic - beginning with a male Blackcap in his garden nearby at 8am, and his first-ever Great Black-backed Gull for Alexandra Park (a species barely recorded annually), seen at 11am over the ice rink car park with a flock of other large gulls.

Below: Stock Doves in the Grove today, 'phonebinned' with a Sony K810i cameraphone and Swarovski EL 10x42 binoculars (Dominic Mitchell) 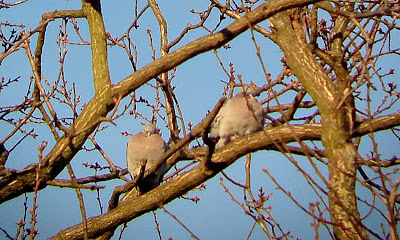